As people, our imagination worlds are very wide and I feel very clearly that we have been moving step by step towards the motto “everything you can imagine can come true”, especially in recent years. How would they react if we told our elders a few generations before us that you could shop without physically using the money, or that you could see your grandson live on a tiny screen? So, what do you say if it were said that you would watch dec concerts years from now on wearing glasses, your copies resembling cartoon characters would attend the meetings, or the product you chose from the department would be delivered to you without an individual from time to time without going to the market?

I think the reaction of our elders and the answer that people who are not in technology as much as we are right now would be the same: ”Get out of there” 🙂

Still the people around me, especially over a certain age elders, is true of crypto currencies, and people I can’t say I’m a boy… in fact, despite what I told my peers still question marks with the conversation’s finishers. Therefore, on the one hand, cryptocurrenciess blockchain I am still trying to explain the world created by his technology to my environment, and on the other hand, there is a system that is moving very fast, and I am trying to keep up with this system myself. I admit, it’s not easy… maybe you need to be a little bit of a dreamer to digest the world that is engulfing us. But from time to time, some projects say “Come, this world is real” with the steps they take… Ceek VR, which I recently had the opportunity to chat with team members, has also been one of the projects that impressed me.

Before mentioning Ceek VR, I would like to point out that this article is not a sponsored article. Investors or readers who are interested in the project should definitely visit the project’s website, join its community and conduct their own research.

Now, “Why did Ceek impress me? Why did a long-standing project come to my attention now? What is Ceek? “let’s look at the answers to their questions…

Why Did Ceek Impress Me?

Ceek VR, a project that has actually been in the ecosystem since 2018, is progressing step by step but quietly. Recently, he has also gained serious recognition with the hearing of the metaverse. So, when did Ceek wink at me? First of all, I will make a positive discrimination here. Ceek VR is headed by a really successful woman: Mary Spio. There is also a woman in the management of Ceek VR’s Turkish Telegram group: Neslihan Hanım.

Although the presence of women in the project was one of the first things that impressed me, in fact, as I started researching, I saw that Ceek VR started making plans for the metaverse when no one knew about the metaverse yet. in 2018, when metaverse didn’t have an m yet, the project started working on this issue. He saw the future of VR glasses and took action to produce VR sets. Therefore, I wanted to share with you this project that interests me.

What is Ceek VR?

Ceek VR actually set out to allow, in the most basic sense, music artists, names from the sports field and content producers to interact directly with their fans. For this, the project, DeFi, the metaverse, NFT and VR technology are used. In addition, VR glasses and headset sets are also included in the work. In this way, our dream of listening to and watching the artists we love in the comfort of our home by wearing glasses and ears, which we watch in the movies, is realized. In addition, Ceek VR hosts not only concerts, but also sports events, content producers’ events, and TV series/movies events.

At this point, one issue that interested me was the following. Ceek VR has a VR kit consisting of patented glasses and headphones. In other words, the project offers its users all the facilities in a complete package. In addition, Ceek VR also collaborates with the world-famous Universal Music, which allows Bon Jovi, Lady Gaga, U2, Sting, Ziggy Marley and many other popular names to perform live at Ceek. For example, Lady Gaga has clips on the platform, and VR set owners can watch these clips as if they were in the clip. In addition, Ceek VR aims to establish cooperation with many more popular names in the future.

I want to point out something here. Performances that have already been released on the Ceek VR platform at the moment can also be watched without VR sets. But this is no different from opening and watching videos on YouTube. Therefore, if you want to feel next to the person you are a fan of, it is worthwhile to buy VR sets. Currently, VR glasses are available on Ceek VR’s site for $ 100, and VR headsets are also available for $ 250.

Sundays Oct, Ceek also has an NFT marketplace, i.e. an NFT market place October Thus, users can collect rare and limited-edition NFTs as collections, get exclusive access to the experiences and content of their favorite famous names, and creators can track their copyrights.

Of course, there is also a crypto currency called CEEK in the Ceek VR project, which is based on Binance Smart Chain, and direct and real-time payments are made using CEEK, thanks to the blockchain. In this way, artists and creators can get their work paid for quickly, efficiently and smoothly.

Ceek’s virtual reality platform is managed by smart contracts and users are based on BEP-20 CEEK thanks to the token, he can get various advantages. Ceek token holders can participate in concerts of famous names, award shows, technology chats, fundraising events, sports events and various trainings. In this way, Ceek decouples the real world and the digital world. In addition, Ceek also provides tokenization of tickets. Thus, the sales of tickets can be tracked directly using the blockchain, and the event owners have also protected their copyrights.

Given all this, in fact, Ceek VR allows direct communication to protect the rights of both owners and fans of the game. Aren’t cryptocurrencies actually trying to do exactly that in finance, too? As we move step by step into a decentralized world and even run now, we will witness that many projects have appeared in this area and, of course, many have disappeared. We are already seeing that some companies and important names have both changed their names and quit their jobs to work in this field. For example, the name of the social media giant Facebook has recently changed to Meta, and Twitter CEO Jack Dorsey has resigned from his job to take a closer look at cryptocurrencies and the decentralized ecosystem. Such big names can’t be risking everything for a world they think is a fraud 🙂

As I mentioned at the beginning, there is a woman at the head of Ceek VR. Mary Spio, He is the CEO of Ceek VR, as well as its CTO. Spio, a digital cinema pioneer, has over 10 patents. Spio, who has held technical leadership positions at Boeing and Intelsat, is also a U.S. Air Force Veteran and Deep Space Engineer. It is also worth noting that Spio’s companies work with many companies that specialize in their field, such as Microsoft XBOX 360 and Tribune News. In addition to these, it is worth mentioning that Spio is on the Boards of October VR for Good, Amazon Launchpad, Scientific Reviewer DOD (CDMRP) and a Spokesperson for the US Department of State. According to an insider, de Mary Spio is described as the “Elon Musk of the future”. 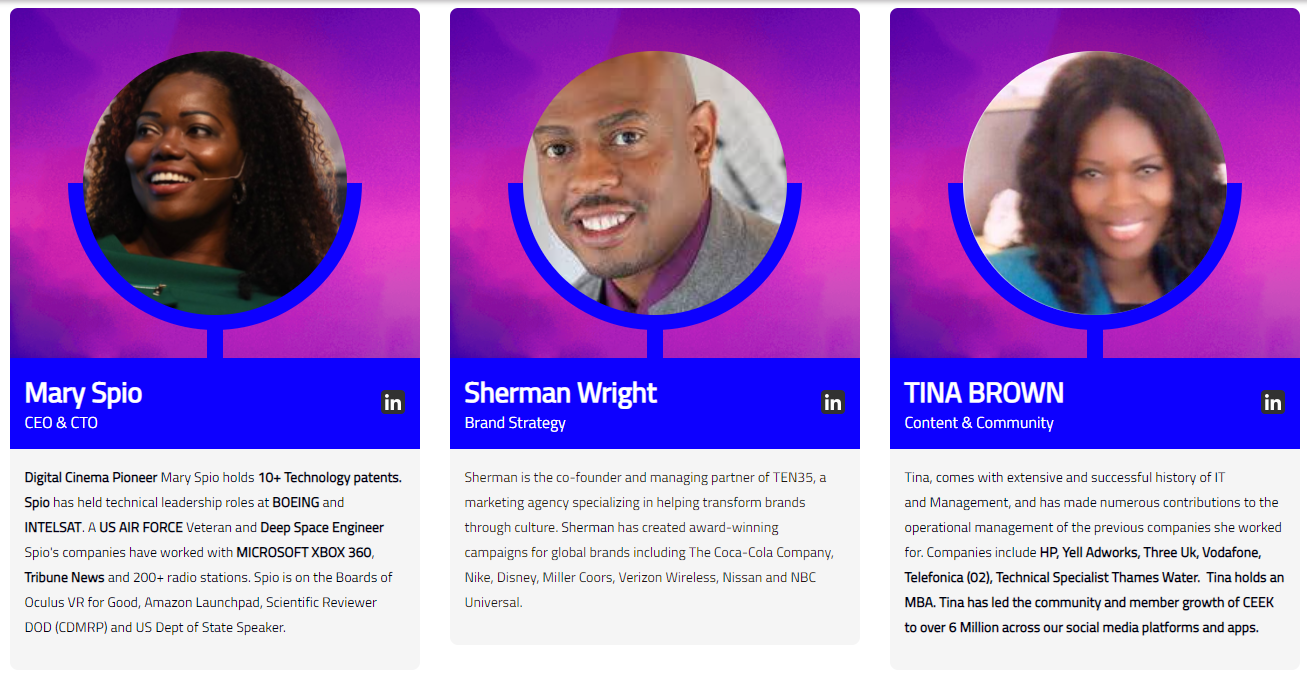 Besides Spio, other strong names are also included in the team. For example, Sherman Wright, co-founder and managing partner of TEN35, a marketing agency specializing in helping brands transform through culture, is involved in the project as a brand strategist. In addition, Tina Brown, whose companies she works for include HP, Yell Decworks, Three Uk, Vodafone, Telefonica (02), Technical Specialist Thames Water, serves as Ceek’s content and community manager. In addition, Keren Poznansky is taking over the public relations of the project; Harold Ofori, Director of Strategic Partnerships; Joe Ortiz VR October and Sanya Bajaj are acting as Marketing Managers.

On the other hand, we see that Ceek VR’s community is also strong. In particular, the Turkish Telegram group, which was formed as a joint result of the initiative of Turkish names and their negotiations with Mary Spio, is moving forward in a very principled way. For example, I was very interested in the fact that crypto currency recommendations are not allowed to be given in the Turkish Telegram group, and therefore manipulation or speculation is not allowed.

CEEK token has a limited supply and it is known that the total supply will be 1,000,000,000 units. At the time of the publication of the article, approximately 744.1 million CEEKS are in circulation.

In october, I would like to mention one more point that interests me. In normal circumstances, cryptocurrencies can apply to major exchanges and request that cryptocurrencies be listed. However, according to Mary Spio’s statements, major stock exchanges are applying for the project to list CEEK. However, according to the statements made again, Spio is postponing this situation for now because he thinks that everything has a time.

In addition, CEEK is currently officially listed on Gate only by agreement. It is stated that exchanges such as PancakeSwap, MEXC, Lbank and Hotbit have listed CEEK on their own initiative.

“Nothing Is a Coincidence”

The people in the Ceek VR team express that it is no coincidence that neither the project appeared in 2018, nor that it gained popularity in 2021. At this point, it is stated that Mary Spio has been working very diligently and has repeatedly reviewed every step she has taken.

“When does the CEEK token increase by 10 times, should the CEEK token be bought or will it make the CEEK investor rich? answers to questions like that. But I was impressed by the connections I made with the team and the fact that the project was moving on its own track. I think we will hear Ceek VR’s name often in the future.

But as I mentioned at the very beginning, before you get caught up in the hype and invest, please first do your own research and take steps by taking responsibility for yourself.